This makes it the perfect time to enjoy the last of the nice weather and to get away for the weekend! Availability for our most sought after accommodation is easier to book at this time of year, making a quick weekend away perfect for both you and your pets. Check out our exclusive VIP (Very Important Pet) Offer below to take advantage of all Elcho Park has to offer in the month of April!

We have a gorgeous group of regular pups coming in for Day Care and now is a great time to introduce your dog to this routine. As the winter months start to descend upon us and the idea of getting up early to walk the dog has you curling up tighter under your doona, Doggy Day Care is the perfect alternative! Drop your pooch off on the way to work knowing that their day will be filled with fun and excitement and games with new friends. Upon collection, you can be sure that they will be thoroughly exhausted after a day of fun!

Do yourself and your pet a favour and rest assured knowing there won’t be sad puppy eyes waiting for you at the back door when you get home! Call us on 5282 1286 to book now!

A Day in the Life 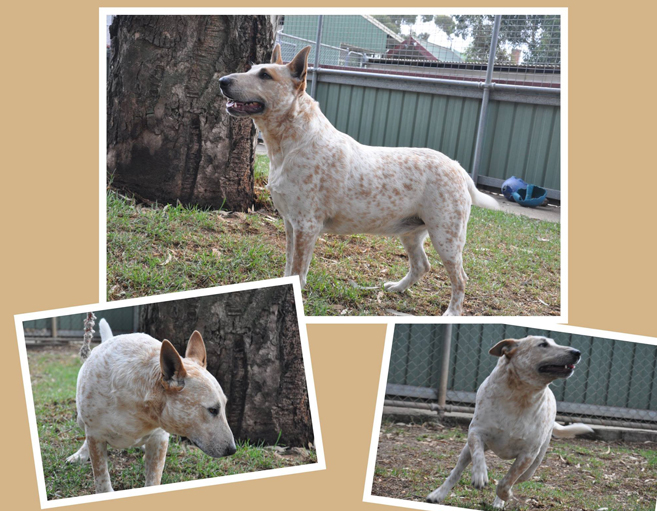 Handsome Ben, a Bull Terrier x Red Heeler has all the time in the world for some snuggles with our Pet Attendants! Look how much fun he is having whilst on holiday with us! To view more images, please visit our Facebook Page: Elcho Park Pet Hotel.

Caring for Old Dogs - An excerpt from DogsLife.com 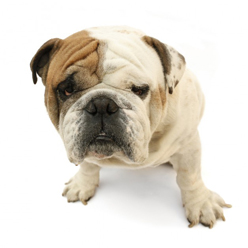 Your dog’s golden years are special years. It’s a time for togetherness, a time for gentle understanding, and a time to show your lifelong companion just how much you care. We’d all love our dogs to live as long as we do, but of course that’s just not possible. However, thanks to advances in science and health care, dogs are now living longer. In the 1970s, a dog over the age of five or six was classified as geriatric, says Dr Angus Ross from Ku-ring-gai Veterinary Hospital. Now that’s all changed.

It’s generally accepted that the smaller the breed of dog, the longer the lifespan. So big breeds such as an Irish Wolfhound or St Bernard probably will not live as long as Chihuahua or a Jack Russell.

So does the old adage of one dog year equals seven human years still apply? To a point, yes. One theory suggests at first, dogs age faster than the 7:1 rule. Consider that a one-year-old dog, although still a puppy, has reached sexual maturity; the same is not true of a seven-year-old human. In the middle years, it tends to follow the 7:1 ratio then slows down in the senior years.

Beware of Chocolate and Pets!

Aging is inevitable, but you can delay its onset by setting a standard of good care for your pet. “The use of appropriate preventative measures beyond worming, heartworm and vaccination are part of a good health program for all dogs,” says Dr Ross.

As dogs age, some illnesses become more likely so caring for a geriatric dog is all about prevention. Early detection of disease can dramatically improve the outcome. For this reason, regular vet checks are crucial. Some of the following diseases are prevalent in senior dogs:

Thyroid Disease (under active)
Symptoms may include – overweight, poor exercise tolerance and seeks warmth.
Treatment – Blood testing will detect the condition. It can be treated easily with an oral thyroid supplementation.

Liver Disease
Symptoms may include- Diarrhoea, jaundice, vomiting, weight loss and lethargy.
Treatment – This disease can be of little significance if properly managed. Low-grade cirrhosis and immune changes within the liver is considered by some to be normal and once more serious types of liver disease are ruled out, a dietary alteration may help.

Arthritis
Symptoms may include – Pain, swelling, lameness, muscle wastage and decreased range of motion. Most commonly affects hips, elbows and knees.
Treatment – Degenerative joint disease (DJD) is one of the most common diseases that face geriatric patients. Treatment is aimed at pain relief and delaying progression of the disease. Medical therapy steroidal (cortisone) and non-steroidal preparations provide pain relief and reduce inflammation. Cartilage protecting and stimulating agents such as poly-sulphated gylcosaminoglycans can assist in repairing damaged cartilage. Surgery may be recommended.

To read the full article, head to: http://bit.ly/1PQXySF 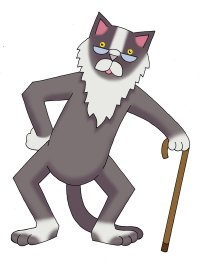 Here at Elcho Park Pet Hotel, all pets’ 12-years and older are required to be a part of our Aged Care Program. This Program includes extensive monitoring, 3 Play Times per day and all medication administration charges are waived.

If your pet has numerous medications or have medical issues that require a little more attention while they are here, it may be beneficial to elect to join our Aged Care Program for greater piece of mind. Give us a call on 5282 1286 to discuss with one of our friendly staff how we can better attend to your pets needs during their next stay with us.

Monday the 25th of April marks the 101st Anniversary of the Australian and New Zealand Army Corps, or ANZAC, landing at Gallipoli. This landing was seen as the “birth of nationhood” – it was the first conflict that these nations fought as federated countries.

The date was chosen to be the National day of commemoration for all those who have served and, especially, those who made the ultimate sacrifice. Alongside those men and women who’ve served were many animals, including dogs. The following is a short story about one remarkable Australian pooch. Words by Kerry Martin from Puppy Tails.

In the autumn of 1914, Digger was a stray. Digger knew nothing of the war in Europe, and when troops started arriving at Broadmeadows, he went to investigate. This dark brown and white Bulldog quickly found a kindred spirit in a young man, just 22-years old, Sgt James Martin of the 1st Division Signal Company.

When the regiment finished their basic training and marched to the troopship, Digger followed. By fair means or foul, Sgt Martin convinced the authorities to take Digger along as their mascot when, on 20 October 1914, the soldiers sailed from Melbourne, Digger went on-board with them. Digger served in the AIF for 3 ½ years and saw action in Gallipoli, and the Western Front in France and Belgium. But Digger was no spectator; he was on the front line. Ever faithful to those he adored and who adored him, he went over the top with the troops – not once, but an astounding 16 times. 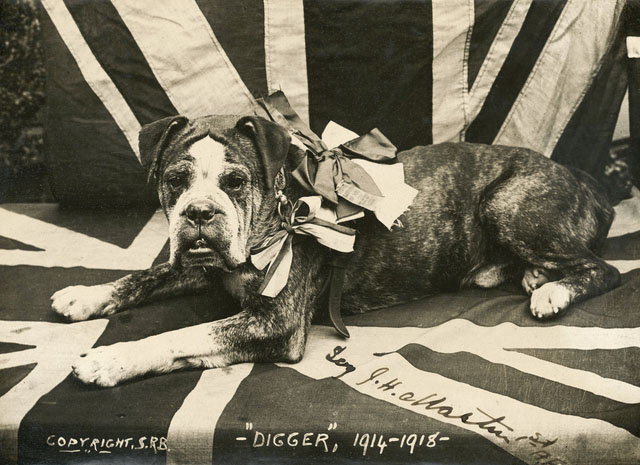 Life in the Trenches
Digger was part of life in the trenches. When the alarm sounded for a mustard gas attack he knew the drill and went to the nearest soldier to have his gas mask fitted. Despite this, at Pozieres he suffered chemical burns – wounds that troubled him in later life.

Undeterred Digger took food to wounded soldiers in no-man’s land, and brought back messages from those capable of writing. In the process he was wounded, gassed, and burnt. He lost one eye, most of his teeth, and became deaf in one ear…but served on.

Return to Sydney
Early in 1918, Digger’s owner, Sgt Martin, was invalided out of the army and Digger was repatriated with him. The pair returned together to Sydney – a stroke of luck because just one-month later strict quarantine laws were introduced which would have prevented this.

Martin and Digger continued to work together by raising money for returning troops. In recognition for Digger’s war effort, the war office awarded him a silver collar, engraved with insignia usually reserved for returning servicemen.

But Digger had needs of his own. Scars from his burns required expensive medication that Martin could not afford. A picture postcard was issued, put on sale to raise money for his treatment – featuring Digger in his silver collar bedecked with patriotic red, white, and blue ribbons.

Digger’s Passing
Sadly, Digger’s story has a heart-retching end. Digger lived into old age but on Empire Day (May 24, 1919) on hearing celebratory fireworks he took fright. He believed himself under fire once again, panicked, and tried to jump a fence to escape. But he fell back, seriously injuring himself. He managed to crawl to Martin’s bedside (who was in hospital at the time) and died beside his master’s bed.

Read more about the Dogs of War and other stories here: http://bit.ly/1S5VpnA 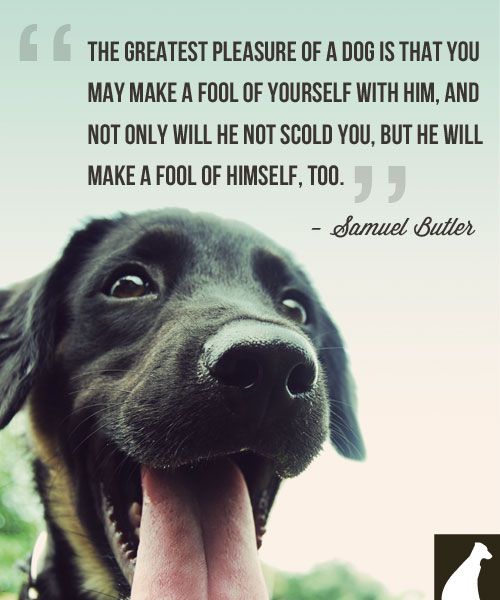 “The greatest pleasure of a dog is that you may make a fool of yourself with him, and not only will he not scold you, but he will make a fool of himself, too.” – Samuel Butler 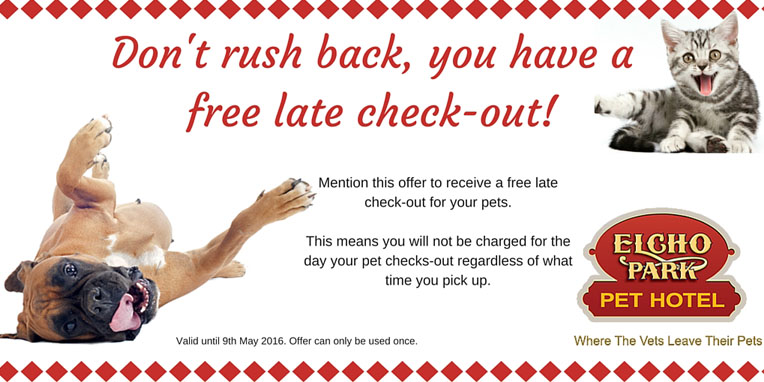 The Pets Hotel Country Club is situated at Elcho Park and boasts a history that dates back 150 years! The bluestone cottage was originally built in 1867 as the gatehouse to the Elcho Homestead located on the hill on Bacchus Marsh Road and was part of a 4,000 acre estate.